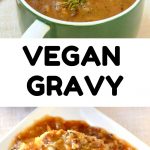 This flavoursome and umami rich vegan gravy is made with onions and mushrooms. Homemade gravy that’s quick and easy and perfect for your vegan roast dinner.

Many store-bought gravy granules are vegan. And they’re convenient as all you have to do is add hot water. So why make your own vegan gravy?

Plus, if you’re going to the effort of making a home cooked vegan roast, it’s nice to have some homemade gravy to go with it! You can have this vegan gravy ready in about 15 minutes, so it’s perfect to make whilst your roast is in the oven.

The base of the gravy is made from onion sauteed in olive oil. Red or white onion works well.

A touch of brown sugar is a shortcut to getting a caramelised flavour, without having to cook the onion slowly and for a long time.

Portobello or chestnut mushrooms work great to bring their meaty flavour to the gravy. You could even add some dried porcini mushrooms for a stronger flavour.

A small amonut of balsamic vinegar adds a nice touch of acidity, and dried herbs bring some aroma.

Flour is used to thicken the gravy.

For our vegetable stock we used Marigold Swiss Bouillon, but you can choose your favourite flavour vegan stock cube or bouillon base, or use homemade veggie stock.

As always you’ll find the full recipe card below, but here’s a visual overview before we get cooking!

To save on time, you can pulse the onions, then the mushrooms in a food processor, but we usually just finely dice ours.

Step 1 - Sauté the finely chopped onion with the olive oil and brown sugar until starting to turn golden brown.

Step 2 - Add the finely diced mushrooms, and continue to cook until they cook down and release their liquid.

Step 3 - Stir in the herbs, balsamic vinegar, and flour.

Step 4 - Finally add the soy sauce and hot vegetable broth and simmer for a couple of minutes or until the gravy reaches your preferred thickness.

For a gluten free vegan gravy, you can substitute the flour with half the amount of cornstarch. Mix it with a spoonful of water into a slurry and whisk it in along with the stock. Be sure to use gluten free tamari sauce instead of soy, and GF vegetable stock.

For a smooth gravy, you could blend it with a stick blender. Thin out with some more veggie stock, if necessary, and season to taste.

Season with salt and pepper to taste, then pour into a jug and serve with all your favourite gravy needing dishes!

It’s perfect on mashed potatoes with some vegan sausages, or served with a vegan roast dinner.

What to do with leftover gravy?

Leftovers can be stored in the fridge in a covered container for 3-4 days.

Reheat in a pan on the stove, or in the microwave. If it’s thickened up too much, you can add a splash more water or veggie stock.

You could use small amounts of leftover gravy in a pasta sauce, add it to a savoury pie, or use it to enhance the flavour of a soup.

We hope you enjoy this vegan gravy recipe! Try it with these other yummy recipes: 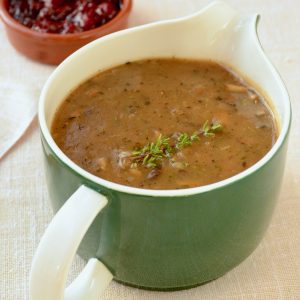 Prevent your screen from going dark

You can also use cornstarch to thicken the gravy instead of flour. Use 1 tbsp cornstarch (or half the amount of flour if you are making more than the standard recipe) and mix it with 1 tbsp water into a smooth slurry. Whisk the slurry in when you add the vegetable stock and bring up to a simmer and stir whilst it thickens.

Loved our recipe? Have a question we can answer? We'd love to hear from you! Sophie and Paul 💚 Cancel reply

= a blog full of great recipes for you!

Meet the Vegan on Board team >>